It seemed only a few weeks previous that I had been skating my way around the icy streets of Leamington and battling knee deep snow in the Alps, and now here I was standing on the banks of the Thames in a sun kissed Richmond about to embark on my first event of the year – The Thames Path 100 (a 100-mile run along the Thames from Richmond to Oxford).

Having had a great run here in 2017, I was hoping for something similar, if not better, this year. But at the same time, I was very conscious that the following weekend was to see me accompanying my wife as she tackled her first multi-day ultra/endurance run along the Cotswold Way (107 miles in 4 days). At 10am, and with the temperature already hovering around 25 degrees, the horn was blown and we were off. I quickly fell in to my own pace and rhythm (adopting a strict run/walk strategy that I have practiced frequently and serves me well) and felt comfortable and relaxed!

As I reached the first aid station at Walton-on-Thames (12miles in), I was slightly up on my predicted/planned pace, but was feeling comfortable and was on top of both my hydration and fuelling (Tailwind, Peanut Butter M&Ms, Veggie Percys and S Caps (salt tabs)). It was now a little after midday and more than a little warm! 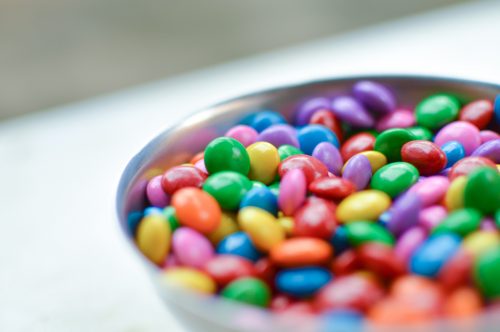 This event is one of my favourite 100milers, for a number of reasons; it is flat (matches my Leamington canal running) and it is a race of two halves – the first being run on hard-packed dirt and tarmac alongside historic towns and vistas (Hampton Court, Windsor, Dorney Lake, Marlow and Henley) and the second across countryside trail and farmland. This is equally beautiful, particularly at sunset and sunrise – where I believe the run truly comes in to its own.

At Wraysbury aid station (22miles), I was still ‘feeling good’, but a little warm perhaps: a fellow runner said his gadget was registering over 30degrees! I stopped briefly to refill my bottles as well as grab some real food (freshly cut melon and pineapple, a handful of strawberries and two cups of coke (full fat variety). I never normally indulge in the black stuff, but find on these events that, similar to Calippos, it is somewhat of a staple! 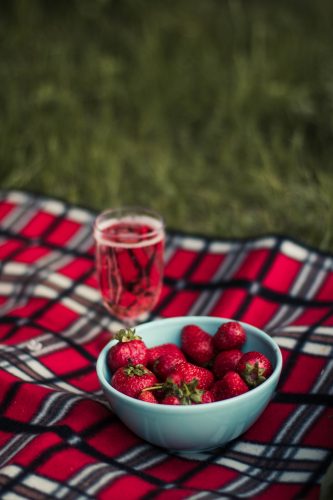 At 25 miles, I happened upon my support crew – Mary and the children – picnicking in the shade. I stopped briefly, re-fuelling on their enthusiasm and excitement as well as a hot cross bun with cheese and pickle (food of the gods).

I reached the next aid station, at Dorney Lake (30miles,) again a little up on schedule, but now starting to feel a little jaded and whilst I took time here to both replenish and refuel, I made sure that I was quickly ‘in and out’ and managed to silence the demons in my head nagging me to take a moment and sit down.* 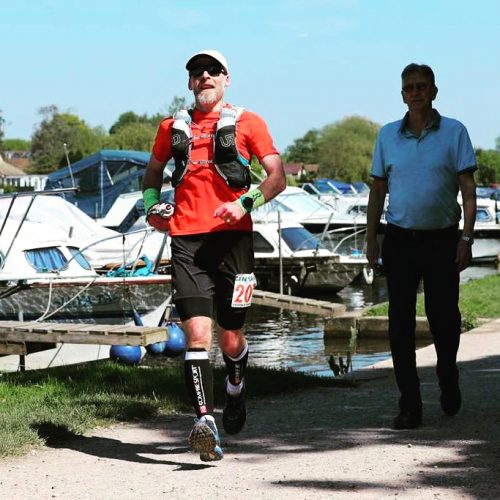 It was at Taplow (35 miles) that I made the decision to stop. I was still feeling good and was, and still am, confident that I could have and would have finished. However, given the incredibly warm conditions we were experiencing I was now more than a little uncertain and becoming increasingly concerned of how able I would then be to run and support Mary the following weekend. So at mile 40, and the Aid Station at Cookham, I unpinned my number and with a little sadness, handed it to one of the crew there.

Mary and children were at Cookham to support me and although disappointed (Samson, ‘Daddy, but you’ve only run 40miles’), were understanding and we drove from there to Wallingford, where I had booked a campsite. After a couple of beers and a good nights sleep in our ‘Supervan’, we took a picnic to the finish line in Oxford and watched in awe, the last few runners to finish. Some most definitely looking a little worse for wear, but all of them victors and deservedly triumphant! 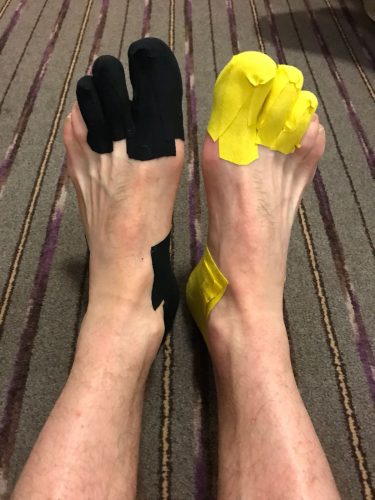 I will return for redemption next year and have a reminder set in my calendar already, to register my entry. But more immediately…we were off to the Cotswolds without sparing the horses/running shoes! 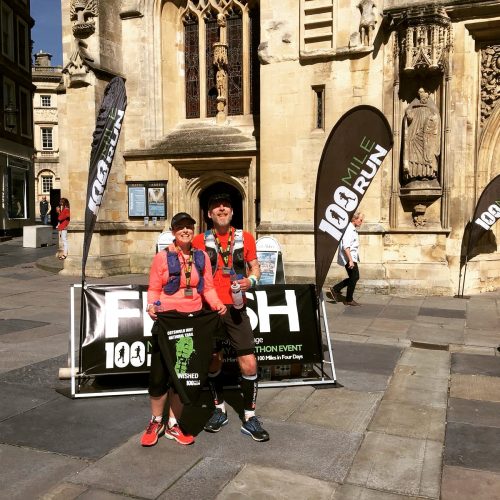 *never ever, ever, sit down in an Ultra unless attending to feet or lower leg issues. We call it ‘Death by Chair’!

If you are interested in doing some Personal Training with Andi, then check out his profile here and contact us today 🙂

I'm a Personal Trainer dedicated to improving my clients health and fitness. I work with people of all ages and levels of fitness, across Leamington, Warwick and Warwickshire. Lose Weight and get fit with Free Spirit Fitness Culture.

How to get Slimmer Legs! – (with 3 easy video workouts!)